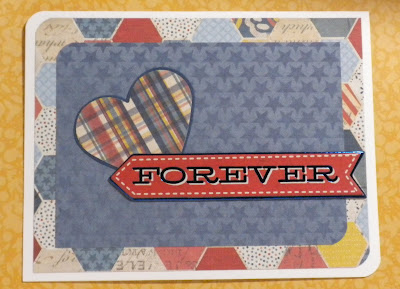 I saw a challenge on Paper Crafter's Library. Check it out here. I went right to my stash of K&Co Americana papers and embellishments and whipped up this card. I love these papers. Each time I use one I feel like I get great results. So glad I bought a 12x12 stack, 2 matstacks, and 10 or so packs of embellishments. These are my go to items when I want to make a great card without too much work coordinating things. The cardstock "Forever" matches better in real life than in the photo. The border is blue foil but it appears to be black in the photo.

I'll be sending this card to Operation Write Home for their Valentines Day Challenge with Archway Cookies.

Thanks for the inspiration, Paper Crafts Library! 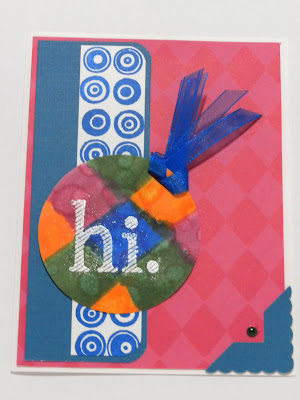 I used 50% rubbing alcohol since it's what I had. Cindy recommended 91%. I didn't get a lot of color variation and I wonder if the stronger alcohol would have provided this. I also used a heat tool to speed the drying time instead of being patient!

I thought this was a cool technique and want to try it with paler colors next time. 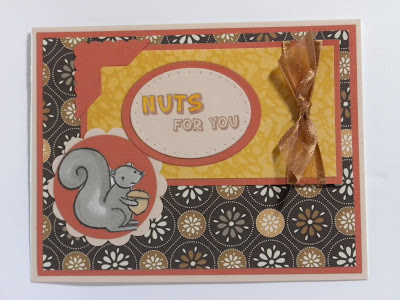 Not feeling the pink/red/hearts Valentine mojo tonight, I opted to make a general love card with earthy papers and a squirrel stamp and sentiment from Hampton Arts. It ended up a fall card, a bit by accident, but I still like it.

It's the first card I colored entirely with Copics! The squirrel is colored with W3, the acorn with E31, and the sentiment with Y17. I started small. I'm working on shading but the colors I have in my collection don't all have blending buddies yet. Perhaps I'll be able to add more soon! Also, I need to get an inkpad that doesn't smear. SU Basic Black is all kinds of runny on this. :(

It's been a slow card making week for me as I spent most of the past week visiting my family. I did work on a little coloring while I was gone and scored a great deal on some supplies while shopping with Mom (see the end of the post for details), but I didn't finish any cards. 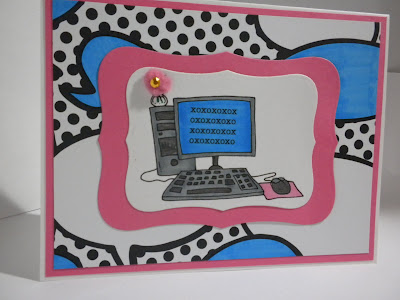 Here's a card that I made for Hambo Hoedown 43 tonight. I was so happy to be picked as Queen of the Hoedown last week that I had to make sure to play along again this week. The challenge was to incorporate something soft onto the card. I had picked up a package of Martha Stewart trim this weekend so I used a tiny piece of it to make the flower on the vase.

The paper I used in the background is from American Crafts. I bought it ages ago and loved it until I tried to use it in a project and was completely stumped. This is one of the first times I've cut it and actually used the patterned side. The reverse is teal, so at least I know I'll eventually use that side if nothing else! The computer digi from Hambo Stamps is going to be great for masculine cards, once I skip the pink! I added the xoxo text to the screen in Word so this can be used for a love card for OWH. Please go play along in their challenges at www.owhstarsandstamps.org to support our heroes with plenty of cards for Valentine's Day!

More about Goodwill: Mom and I went shopping late on Black Friday but we weren't interested in hitting the big box stores for great deals on tech gadgets. We weren't even shopping for presents. It was just our day to hang out together, which happens so rarely anymore. We decided to go to a big craft warehouse that we'd never been to. It was OK, but nothing was well priced and not having a particular project in mind, we left empty-handed. We continued on to a nearby town's outlet mall for a late lunch and some browsing. Nothing was exciting there, either. I remembered a really large Goodwill store up the road, so we went there after lunch. We were surprised to see such a large number of cars in the parking lot- perhaps 75? We headed in and saw lines 6 people deep. Clearly, there were good bargains to be had! We browsed the housewares section and I came across a great find- Martha Stewart punch around the page sets new in their packages for $3.97 and a single MS border punch for $1.97. We scooped up a few designs we liked and saw a bin of K &Co and other embellishments. They weren't marked, but we found out that they were $.47 at the register. So, I left with three new PATP sets (one large and two regular size), one single border punch, and seven packs of embellishments (retail 2.99-3.99 each) for $18.20 including tax! That was my bargain of the year! Now to figure out how to store my new goodies...

OWH has partnered with Archway cookies again this year. If we OWHers can send in 5000 love or Valentine's Day cards by 12/10/11, Archway will be sending 5000 cookies overseas for our heroes.

I'm doing my part with 30 cards made thus far. Here are some I made this weekend. 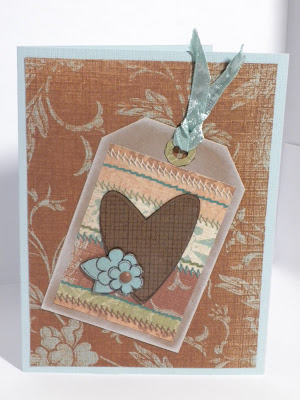 This card also qualifies for the MWT to make a card without a sentiment- something that's so hard for me! 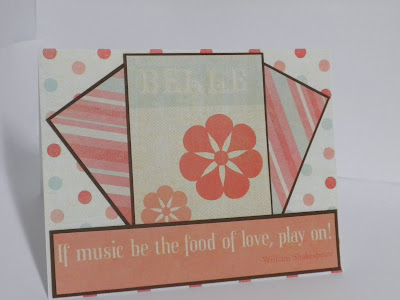 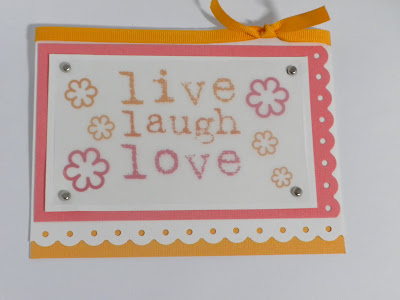 Silliest sentiment ever, but the paper on my desk matched the vellum, so I made the card! 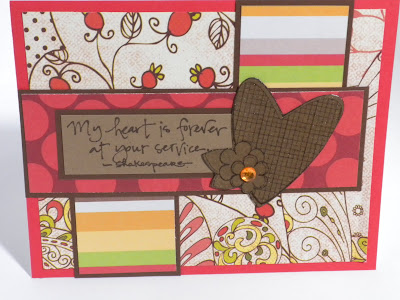 I'm happy with my paper choices on this one. Not sure about the jewel, however. 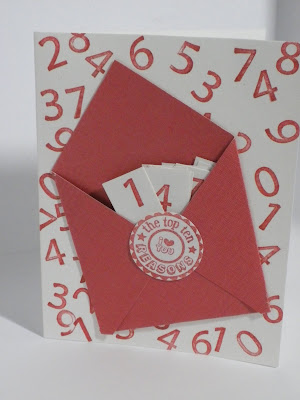 This last card is fun, I think. There are 10 strips of paper tucked snuggly into the red envelope so the top ten reasons can be enumerated! 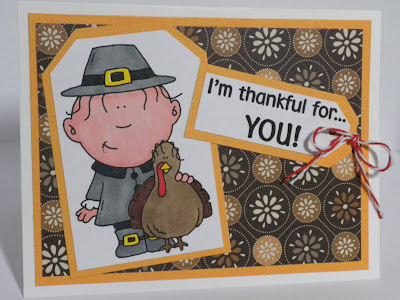 Here's Hambo's little digi- Wee Henry with Turkey! He was a freebie for those of us who played along in last week's challenge. I just got this one in on time. I forgot about it yesterday when I was crafting and saw the digis today and knew I had to get cracking so as to keep up and not miss a week! I paired the digi up with some DCWV cardstock and patterned paper and some We R Memory Keepers twine. It's a simple card, in keeping with my usual style. :)

Email ThisBlogThis!Share to TwitterShare to FacebookShare to Pinterest
Labels: fall, hambo, thank you, thanks 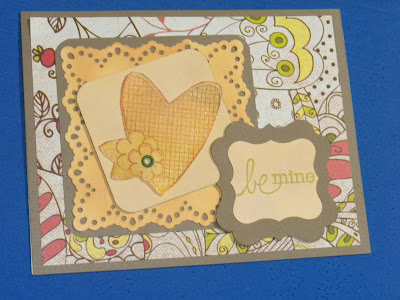 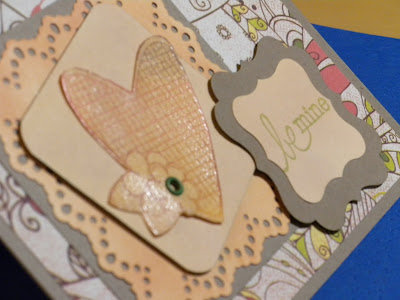 I won some great stamps from Unity off a contest on Ellen Hutson's blog a few weeks ago. Here's a card for OWH I made using the stamps and some scraps of paper. The patterned paper is from DCWV's Indian Summer stack. The border punch is MS. I stamped the heart with an Inkadinkado spectrum pad and then coated the whole thing in Versamark Champagne Dazzle and used clear embossing powder to set it.

Thanks, as always, for visiting!


After I made a few cards with the "Patti Splat" technique from Ranger, I wondered what else I could do with the bingo markers I'd just bought. Sure, I could drop $20 or more to actually play bingo, but what fun is that? I needed another crafty purpose.

I went to work making my own patterned papers with the bingo markers and turned them into these love-themed cards. I think this could be a great way for moms to get their children involved. Set out a few colors of bingo markers and help them think of good overall patterns. I did simple polka dots, plaid, squiggles, spirals, squares, and more of the splats. I know this technique isn't for everyone, but since I gravitate toward bright colors and bold prints, it's right up my alley. You don't see many vintage designs on this blog!

Notice, too, that I just got my Tim Holtz Craft Pick so there's a lot of faux stitching going on! :) 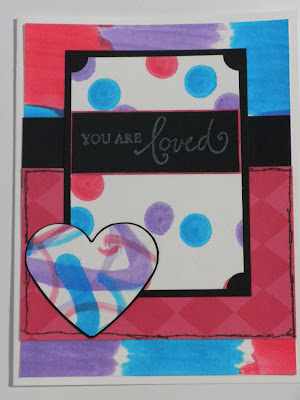 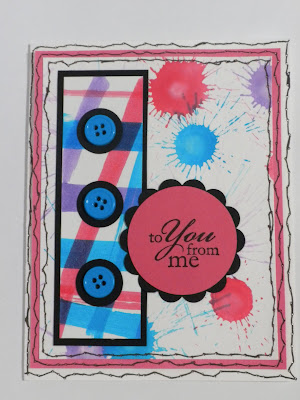 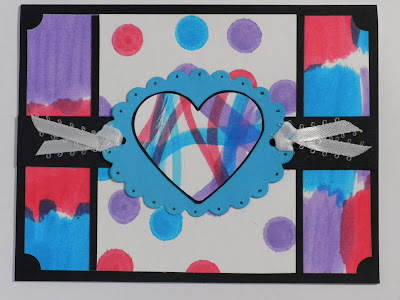 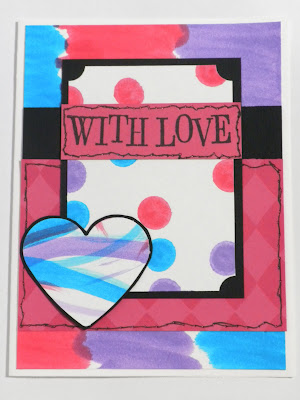 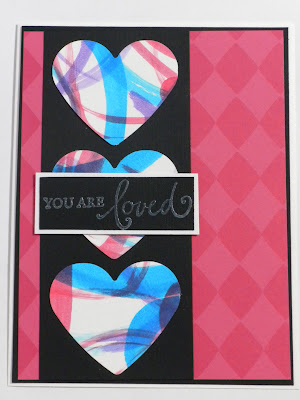 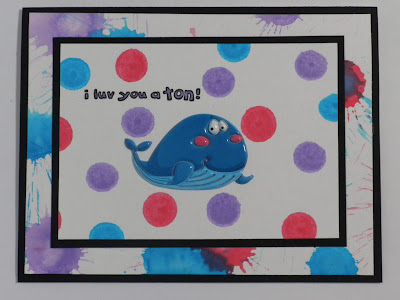 A note on the whale sticker: I bought a pack of these and another of dinos at a dollar store over the summer. Was I ever surprised to see them for $2.99 on my first ever trip to Hobby Lobby yesterday! It goes to show you just have to know where to look to get great stuff for a reasonable price!

Happy Sunday! Where do the weekends go?

Here are two cards made with last week's freebie from Hambo Stamps, the camera guy. I've been loving the masculine digis we've gotten from Hambo the last few weeks. :)

Hambo's challenge this week was to use a frame on the card. I used two Sizzix frames on the first card. 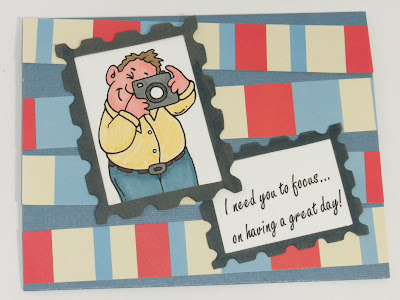 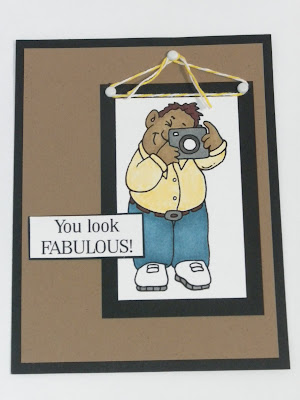 I tried to incorporate both challenges into one card, but it didn't come together right. I didn't seem to have the right sized frames and I didn't want to make one by hand. 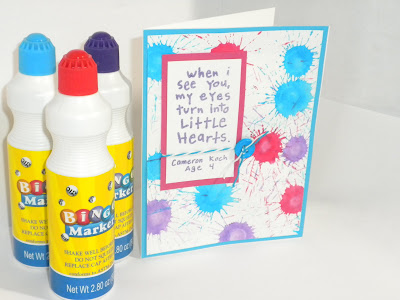 On the OWH bloghop yesterday, Ranger shared a trick called the "Patti Splat!" I modified it to use supplies I had easier access to- bingo markers. Just take the bingo marker, ink it up using scrap paper, drop a drip or two of water on the dabber, turn it over and smack it onto the paper. To protect your work surface and clothes, do this inside a shallow cardboard box. I used a box that measured 12x12x4. If you want to try this yourself, these bingo markers are from Dollar Tree, so it's a cheap project to try out. You may also want to check your kids' art supplies since bingo markers can also be used by kids to make neat paintings.

Today is Veterans' Day and across the USA, people are commemorating the bravery and sacrifice made by our nation's veterans. In that spirit, I wanted to share a card I made this evening. 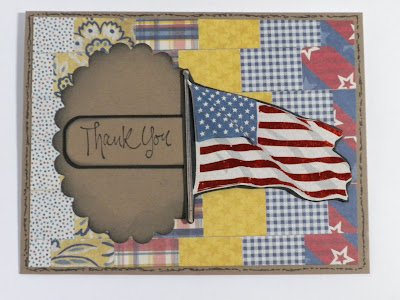 I used the bargello technique to make the background of the card. (I could swear that I first saw this on OWH Stars and Stamps but I cannot find the post! I seem to remember a card with a blue background and a fish focal as the focal point.)

Anyway, all the patterned papers and the flag embellishment are from the K&Co Americana line. I love that line! I removed the back layer of foam from the flag and layered it on black so it would stand out more against the patterned papers. The sentiment is from Stampin' Up All Natural (long ago retired) and the die cut is a scallop circle nestability from Spellbinders.

Email ThisBlogThis!Share to TwitterShare to FacebookShare to Pinterest
Labels: nestabilities, OWH, patriotic, thank you, thanks

I looked at my pajama top today and was inspired to make this card. I just used a variety of circle punches and some DCVW cardstock from various pads. It fits the Midweek Throwdown theme, too! 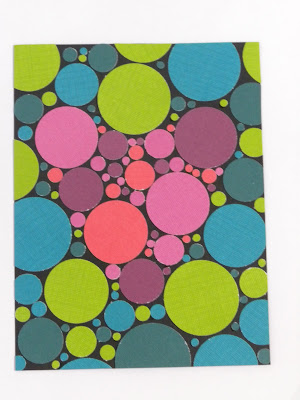 Love challenge for "Our Daily Bread" 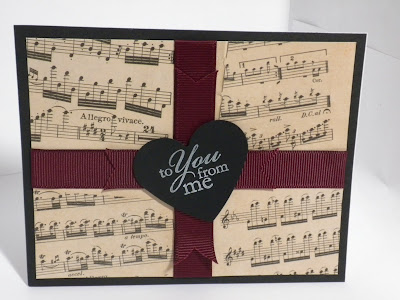 The great stamp company Our Daily Bread has teamed up with OWH to start offering a monthly challenge. If the OWH cardmakers can link up at least 50 cards for the challenge, they'll cover shipping for two boxes of cards. What a nice way to show OWH support!

This month's theme is love or Valentine's Day cards. I used paper from the Perfomance Matstack. I'm really loving this paper for romantic cards. It's very rich and mature, so I think it will appeal to husbands, wives, boyfriends, girlfriends, and fiances who are looking for something to send home. The stamp is by SU and the ribbon by Offray. 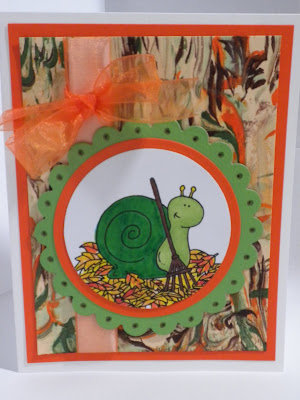 Isn't this snail rake digi from Hambo cute? Join the Hambo Hoedown and you can get a free digital image each week you follow the requirements. I've done it for about two months now, and I've had a great time each week waiting to see what the new image and challenge will be.

This week the challenge was to use a tutorial from Splitcoast Stampers in making the card. I chose the shaving cream paper tutorial.